It’s been over a month since my trip to Washington, but the memories are still fresh in my mind and I’ve been meaning to share my adventures with all my readers.

My dad and I left for the airport in Edmonton on Wednesday evening, November 6th, as our flight was very early the next morning. From Edmonton, we had a three-hour long stopover in the Minneapolis airport.

I found that the Minneapolis airport is a nice place to kill time — stores, restaurants, and a sky bar with iPads to borrow and a place to charge your own iPads!  We got into Washington in the evening and took the Metro from the airport to the hotel, the Liaison Capitol Hill Affinia, where we dropped off our bags and headed to Legal Sea Foods for supper — I had a steamed lobster (my favourite) and dad had fish and chips. The supper was wonderful, but we both desperately needed sleep.

We woke up on Friday around 9am, then walked to the Natural History Museum to look at the exhibits before the radio show. One of my favourite exhibits was The “Once There Were Billions” display, located in the museum’s main hall. Behind the glass of the exhibit are Carolina Parakeets, Heath Hens, a Great Auk, and three Passenger Pigeons, including Martha, the last known Passenger Pigeon. The display was both fascinating, and very sad.

These small-scale bronze sculptures of the extinct North American are part of the Lost Bird Project. The large sculptures are on display in the Smithsonian Gardens until March 15th, 2015.

A beautiful poster explaining the exhibit and I love that the poster includes a QR code,

Henry the Elephant in the rotunda of the museum, 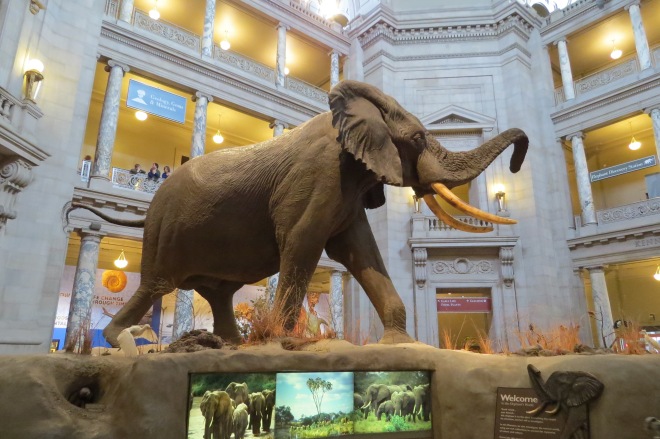 We spent four hours touring the rooms and halls of the museum; the Hope Diamond, a Tyrannosaurus Rex skull, and the mounted mammals were all highlights for me! Back at the hotel, we both had a nap, then went for an early supper. The restaurant was Cafe Berlin and we both enjoyed our meal very much, and dad his draft beer.

Saturday morning, Mark and Sharon arrived at the hotel where we sat down in the hotel restaurant had some chocolate chip scones and did some catching up. We were meeting Ray and his friend Catherine at the museum’s theatre at noon, where the show was going to be broadcast from.

The Qrius Theatre is large, (holding about 100 people), but very intimate, with lovely green seats — it’s a very nice space.

After looking around the theatre, Ray and Catherine went to the hotel to drop off their bags, but Dad, Mark, Sharon, and I took a quick tour of the museum.

Outside, the day was so sunny and warm, perfect for a walk to the Washington Monument as we all wanted to get a closer look at it.

A view of the Capital Building from the monument,

Sharon took this photo of me in front of the monument — thanks Sharon, 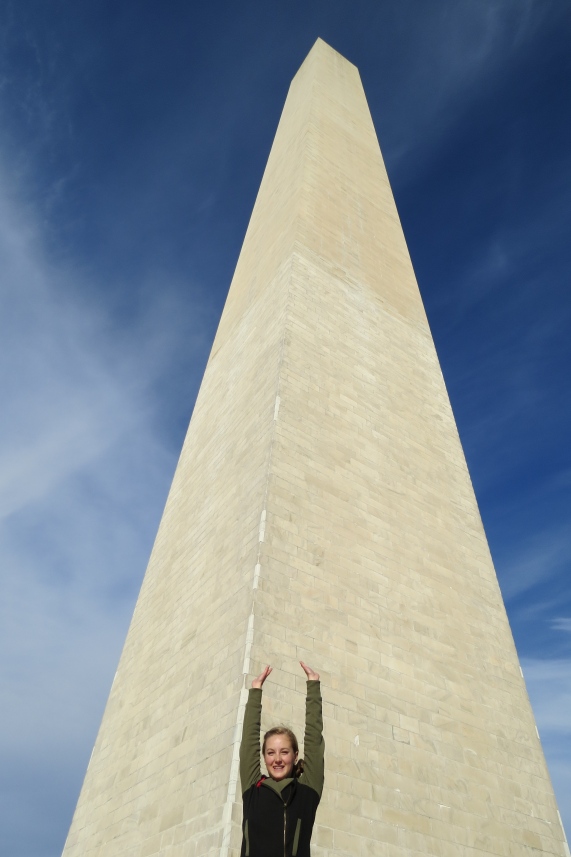 On the walk back to the hotel we passed the Capitol Building which was under some construction,

The trees around Washington were beautiful — oaks, elms, and maples with leaves of gold, red, yellow, and green, 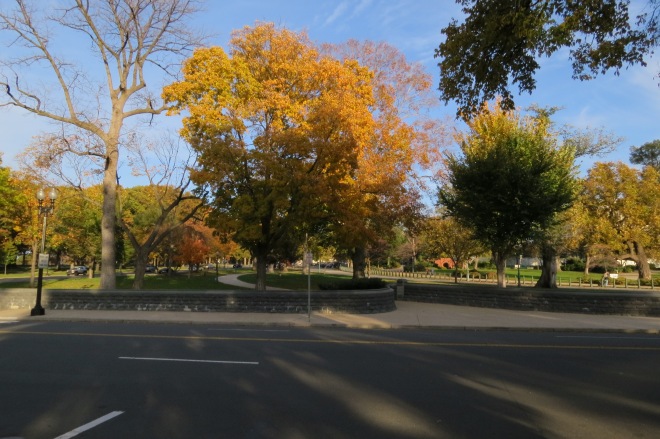 Saturday evening we all had supper at one of the restaurants in Union Station, it was a wonderful get together.

Sunday morning was the big day! The radio show started at nine, but we all got to the theatre at seven — setting up everything we would need for the show. 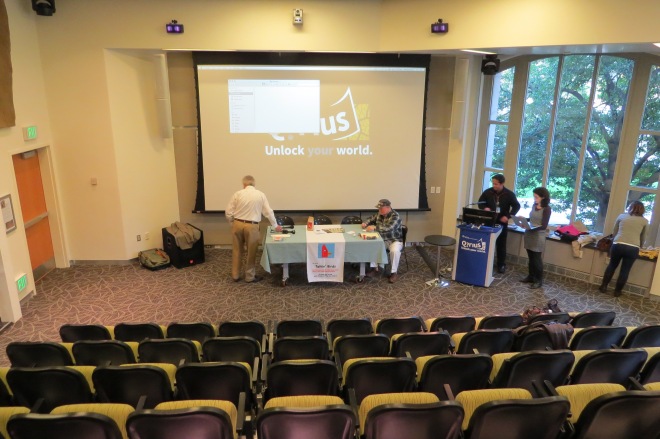 People started to arrive at around 8:30, including the show’s guest, Dr. Bruce Beehler, who is an ornithologist, ecologist and naturalist based in the Division of Birds in the National Museum of Natural History, Smithsonian Institution. Dr. Beehler is one of the authors of the Birds of New Guinea which was recently released as a seconded edition by Princeton University Press.

At nine the show started Listen the the full show here (you can also listen here on tumble and here on iTunes). Ray played a clip of my first call in to the show four years ago, he talked to Dr. Bruce Beehler about his book and crossbills, and I was very honoured to read the clues for the show’s mystery bird contest.

You can find more photos from the 500th show here on a previous blog post.

Thanks to the Talkin’ Birds Crew for signing my copy of the show’s program, 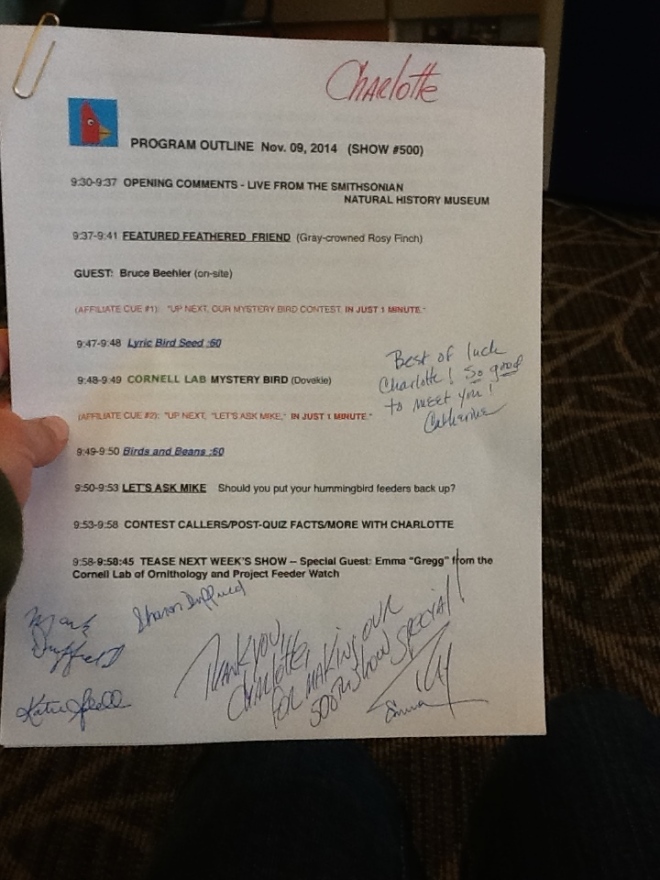 After the show, Ray had a short slideshow that everyone enjoyed thoroughly, then a short Q and A with the audience. It was a wonderful show and I meet wonderful people.

One of the birders who attended the show was Nick who writes at The Birdest. Nick asked if I wanted to join his friend Zach and Emily. The four of us walked to the reflecting pool where Canada Geese, Ring-necked Ducks, Mallards were all feeding. I spotted a Bald Eagle flying overhead and Nick saw a Sharp-shinned Hawk with the eagle.

I was a nice walk with some good birds — thanks Nick, Zach, and Emily!

Here’s our eBird checklist from our walk. 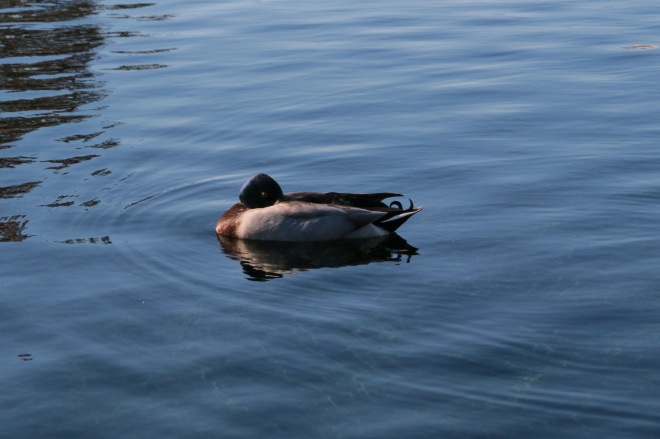 Back at the museum, we took a cab to the Hawk ‘n’ Dove for brunch/lunch,

Thanks to Catherine for this photo

Thanks to our waitress at the Hawk ‘n’ Dove for taking a photo of all of us,

From brunch/lunch, Ray, Catherine, Dad and I walked back to the hotel. 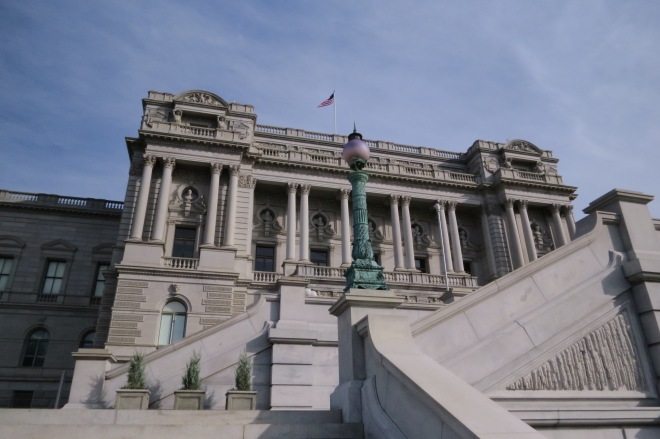 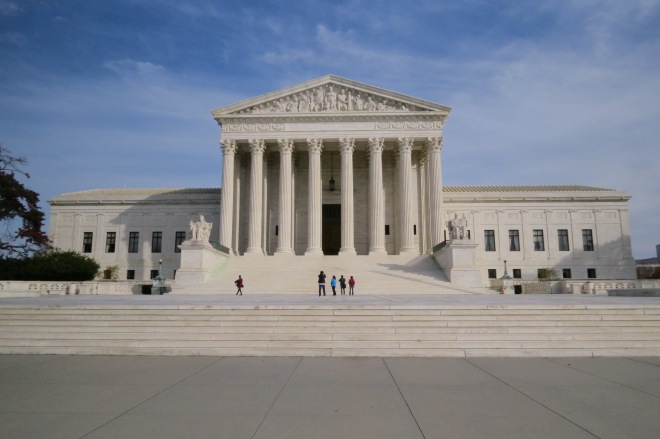 Pansies near the Capitol, 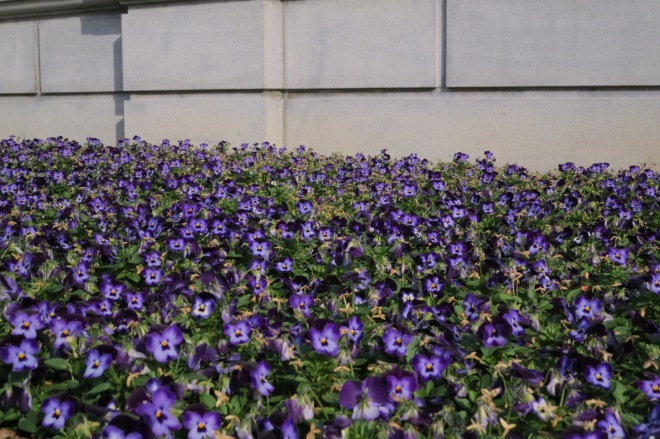 Squirrel in the pansies,

This Northern Mockingbird was perching and eating berries in a tree near Union Station,

One of the many Blue Jays around the city, 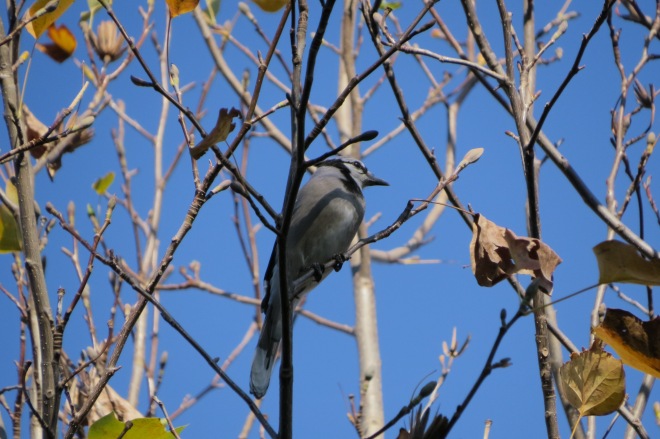 Right near the Capitol Building is the United States Botanic Gardens, which houses almost every fern, tree, orchid, and cactus you can think of. 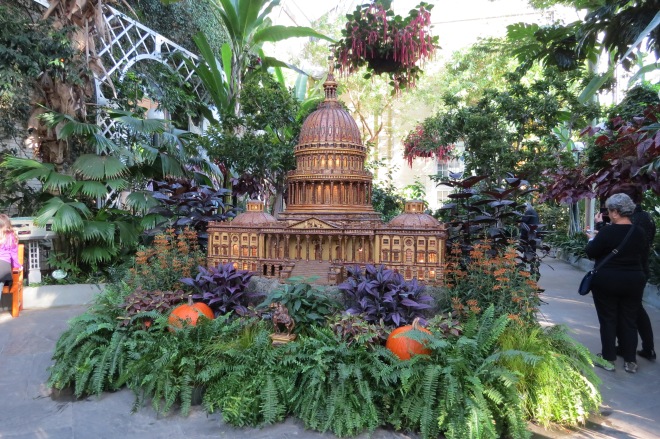 I had an excellent time in Washington D.C. for the 500th radio show at the Smithsonian Museum of Natural History.

I’m sorry for my lack of Feathers on Friday these past months, Fridays seem to sneak up on me. Do check out FoF posts from Ethan at Bird Boy and Josiah at Birds in Your Backyard who have been doing an excellent job publishing FoF posts every week.

One of my favourite photos from my Washington trip, a Northern Mockingbird, 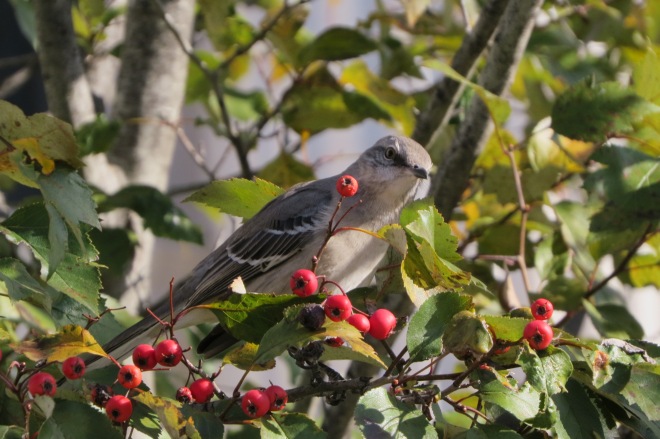 Just a reminder that tomorrow morning at 9:30 eastern is the special radio broadcast celebrating the 500th show of Ray Brown’s Talkin’ Birds [this link isn’t working for me at the moment], live from the Smithsonian National Museum of Natural History.  You can listen tomorrow online with live streaming or via podcast. You can also follow the show on Facebook and Twitter. One of tomorrow’s guests is  Smithsonian ornithologist Bruce Beehler. I’ll be on the show too, and I’m sure Ray and crew will have some other surprises!

Here we are earlier today, after checking out the Q?rius Theater at the Smithsonian National Museum of Natural History; from left to right, associate producer Emma Morgenstern, me, Ray Brown, and executive producer Mark Duffield (photo courtesy of Talkin’ Birds Instagram),

Yesterday’s interview with Ray Brown, at Nicholas Lund’s blog, The Birdist (Nick will be here tomorrow, too)

Ray Brown, beyond the birds

Since I started birding in 2009, my favourite birding radio show has been Ray Brown’s Talkin’ Birds — a weekly call-in show out of Boston on 95.9 WATD FM. Last year, the show was featured in a Boston Globe article by Linda Matchan, which you can read here. The show airs Sundays at 9:30 am and you can listen online with live streaming or via podcast. You can also follow the show on Facebook and Twitter.

I’ve been a loyal listener for about six years, and consider Ray to be a good friend and incredibly generous mentor. And in the interest of full disclosure, I’ve won more than my fair share of Droll Yankees from the show’s mystery bird contest. In the past year, the crew at Talkin’ Birds and I worked on incorporating into the show my sightings from here in Alberta as well as  information for young birders and naturalists. Earlier this spring, the crew and I sorted out my piece of the show — a twice-a-month segment, about two minutes long, called Charlotte’s Weblog.

This month, Ray Brown’s Talkin’ Birds is celebrating its 500th show — a big congratulations to Ray and Talkin’ Birds! I’m very excited to share that I’ve been invited to be a part of the celebrations with a live broadcast next Sunday November, 9th at 9:30 am from the Smithsonian National Museum of Natural History in Washington, D.C. Thank you very much to the show and sponsors for paying for the cost of my flight and hotel room.

If you’re in the Washington area and are interested in attending the live broadcast, please visit the Talkin’ Birds Facebook page for details and to RSVP.

I’m so excited to meet Ray in person (and Mark and Emma) to be able to celebrate such a wonderful anniversary!