:: A breeding pair of endangered Hawaiian Geese, the state bird of Hawaii, thought to have been absent from the island of Oahu for hundreds of years, has been found nesting there. The Hawaiian Goose, or Nene, is a descendant of the Canada Goose which arrived in Hawaii almost one million years ago, shortly after the islands were formed.

:: Newcastle Disease Virus (NDV), which is highly contagious and often fatal for poultry and pigeons, might be a possible cancer treatment in humans

:: In the United States, House Republicans are hoping to prove that the Obama Administration is selectively enforcing wildlife laws to prosecute oil and gas companies while sparing wind-energy farms, and bird deaths are coming into play

:: From Jeremy at A Victoria Birder: Killdeer for the Win!

:: From From Laura at the ABA blog: Galveston Bay Oil Spill: What We Birders Can Do

:: From Josiah at Birds in Your Backyard: A Special Visitor – Pileated Woodpecker

:: From Russell at British Columbia Rare Bird Alert: First Northern Cardinal in BC

:: From Jeremy at The Naturalest Naturalist: Conquering a Nemesis: Say’s Phoebe and Tiny Picnic Tables

:: From Ashley at Views from the Urban Lake: Feeding Wild Birds in Your Garden

Spring has officially arrived after a long winter, but the weather is not very spring-like yet. in this part of Canada, nature is in charge, not the calendar! I haven’t been out birding lately because of school, practicing for our music festival, and a busy calving season, which has kept me busy.

A couple of days ago, I walked to our mail box about half a mile from our house where I was hoping a particular parcel would be waiting, and did some birding on the way. I saw a bunch of chickadees singing their Spring song, “hey sweetie”, one Downy Woodpecker, a number of Black-billed Magpies and House Sparrows, and a lone Canada Goose flying overhead. the new season is slowly but surely creeping in!

Some of the chickadee were shyer than others, but this one was very co-operative in letting me get close,

The slough across the road from my house is still frozen solid, but in a couple of weeks it will be filled with thousands of geese,

I found this nest, but I don’t know what species built it,

Success at the mailbox! I was very excited to find my American Birding Association Bird of the Year stickers in the mail, and as usual and I immediately put them on my binoculars. This year, the Bird of the Year is the Rufous Hummingbird,

Male and female House Sparrow at our farmyard yesterday afternoon,

:: From Josiah at Birds in Your Backyard: Feathers on Friday

:: From Ethan at Bird Boy: Feathers on Friday 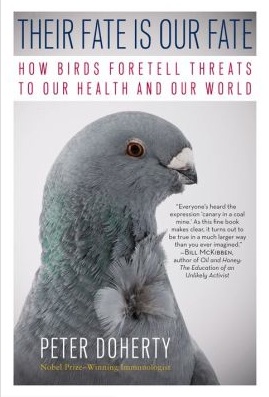 In early September, Dr. Peter Doherty’s new book, Their Fate Is Our Fate: How Birds Foretell Threats to Our Health and Our World, was published by The Experiment Publishing. Last summer I had left drafts of some items, and sent emails about others, for Birding News blog posts while I was away in Long Point, and my mother included the mention of Their Fate Is Our Fate in one of posts. When I got back from my trip, I was excited to learn from Sarah at The Experiment that she was sending a review copy, which I finished recently and found fascinating.

The book focuses on the relationship between bird diseases and human diseases and how birds can be important alarms, or sentinels, when new viruses appear. I can’t think of anyone better qualified to write on this subject, because Dr. Doherty is not only a keen birder (though as he writes in the introduction, he has “come late to bird spotting…. The discovery of a new interest as the years roll on is one of life’s good surprises”) but is also Laureate Professor, Department of Microbiology and Immunology at the University of Melbourne, and won the Nobel Prize for Physiology and Medicine in 1996 with Rolf Zinkernagel for their pioneering immunology research. Which also means that the writing can get quite technical and academic, but Dr. Doherty is very good at explaining matters well and clearly. In fact, an earlier 2012 edition of the book was published by Melbourne University Publishing Ltd. This edition very helpfully includes end notes, Latin binomials for common bird names, a list of further reading and reference for each chapter, and an index.

As Dr. Doherty writes in the introduction, the book was

conceived as an exploration of the interactions between the natural world, birds and humans — an exploration that goes beyond the more familiar social and environmental themes in order to discuss a further, darker realm of pathology, poisons and pestilences. Clearly, much of this reflects human activity and, as concerned individuals, it’s up to us do whatever we can to minimize negative impacts.

For someone who has been a research scientist and academic for so long, Dr. Doherty is passionate about the role of citizen scientists to provide more information toward the goal fo more knowledge:

Professional scientists and those who are able to gain the attention of the media on environmental issues clearly have their parts to play but, whether we change any formal scientific training or not, each and every one of us can potentially function as a “citizen scientist” when it comes to making key observations on what’s happening out there in nature.

No doubt when you read the book’s subtitle, you thought about the proverbial canary. Dr. Doherty addresses this from the start:

We’ve all heard about the coal mine canary that suddenly stops singing and keels over from toxic gas poisoning before the miners are obviously affected. But why is the canary more susceptible? The idea that birds act as sentinels providing us with early warning of potential dangers in the natural world raises some immediate questions: How are avian species similar to mammals like us? And how are they different?

But did you also know about sentinel chickens (which by the way was the title of the original Australian edition)? They are used from Florida to Australia, sometimes in cages on golf courses, to monitor viruses that are transmitted by mosquito (arboviruses, an acronym for arthropod-borne viruses), such as West Nile Virus. After a good overview of basic avian biology in the first few chapters, Dr. Doherty goes on to cover a number of viruses that affect the bird world, from WNV to the avian flu, the tick-borne flavivirus affecting the Scottish Grouse. For the second half of the book, he goes on to discuss the “other, more complex infectious organisms that cause severe disease problems in birds, and in mammals like us”, from malaria to psittacosis to cancer, as well as scientists through the ages who have been “Bug Detectives” (this chapter reminds me very much of the book Microbe Hunters, which Dr. Doherty mentions in the chapter on the Great Parrot Panic).

The last few chapters move away from disease to how humans have affected bird health and populations around the world, from the introduction of non-native species and non-native predators, to fishing and hunting (the threats of overfishing and use of toxic lead shot and sinkers), poisoning by pharmaceuticals, and climate change. And of course, there are the consequences to humans of their actions. Dr. Doherty discusses the use of lead which poisons raptors and loons, and the overfishing of horseshoe crabs which in turn is one of the reasons the Red Knot population is declining. The last chapter discusses how citizen scientists can play a vital role when it comes to bird conservation, contributing to science by helping to collect data on different species, whether by participating in Christmas Bird Counts, the Great Backyard Bird Count in February, and regularly submitting checklists to eBird.

Sometimes it can be a bit discouraging, especially as a younger birder and a young person, to read many of the books and articles on conservation and ecology; they can often make you feel rather hopeless, that we are going to inherit a huge mess that will be impossible to clean up or reverse in our lifetimes. But Dr. Doherty is at the same able to make you appreciate the importance of birds to the global ecosystem, and the consequences if they did no longer exist, as well as feel hopeful about some sort of solution.

The House Sparrow may be a nuisance in North America, it is a declining species in its native range of Europe and India. The Nature Forever Society is hoping to raise awareness of the sparrow’s declining population creating World House Sparrow Day.

World House Sparrow Day has been celebrated on March 20th every year since its establishment in 2010. Even though we’re past March 20th, there are still a few ways you can help the House Sparrow (if you’re outside of North America) by putting up nest boxes and bird feeders.

:: The results are in for the Great Backyard Bird Count 2014, and it was another record-breaking year

:: The large, flightless moa was driven to extinction 600 years ago by overhunting by the first humans to arrive in New Zealand

:: In the town of Davie, Florida, a new law awaiting final approval would make the Sunny Lake Bird Sanctuary even more of a refuge, by banning motorized boats and ATVs, requiring those fishing to cast their lines only in marked areas; and prohibiting cats and dogs from roaming freely; the sanctuary, which the town bought in 2004 for $3.4 million, is a 20-acre refuge for White Ibises, Wood Storks, Great Blue Herons and Great Egrets.

:: A San Francisco environmental group has taken the city to court, because it says that a 189-acre proposed residential and commercial development would hurt some of the Bay Area’s last remaining Burrowing Owls, and that the city’s Environmental Impact Report for the project does not adequately address the regional significance of the local Burrowing Owl population.

:: From Shyloh at Beakingoff: Ontario YOW Reunion and Epic Birding

:: From Bob at Two Birders to Go: Four in One

:: From Julie Zickefoose’s blog: Sungrebe on the Sarapiqui!!