The Northern Flickers arrived a few days ago, and yesterday I saw this one sitting on our roof,

Birds in Your Backyard

The Cats and the Birds

Our group counted nine displaying males this year, and one female — down from last year’s count of 15 males and no females.

The view from inside the blind,

A lone female grouse came to the lek. The females can be distinguished from the males by their lack of both the yellow eye-combs and the purple air sack on the neck,

Two grouse landed on one of the blinds and even danced there,

It was difficult to photograph the birds as they moved between sunny and shady spots very quickly, 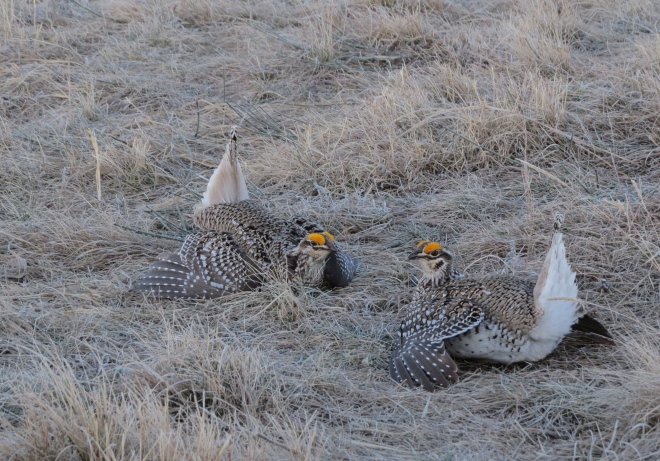 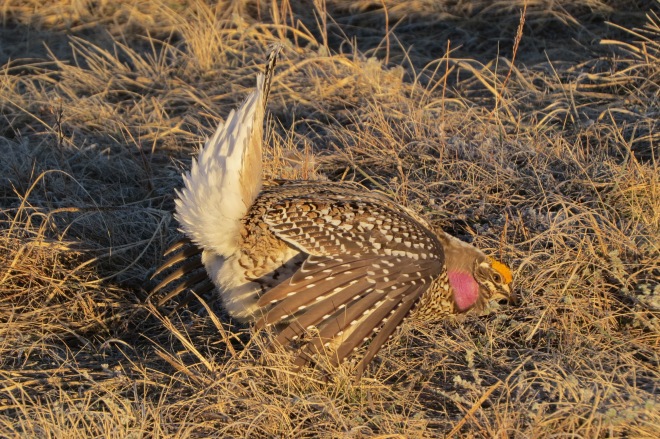 I’m pretty happy with my photos this year between the better weather and knowing my camera a little more. 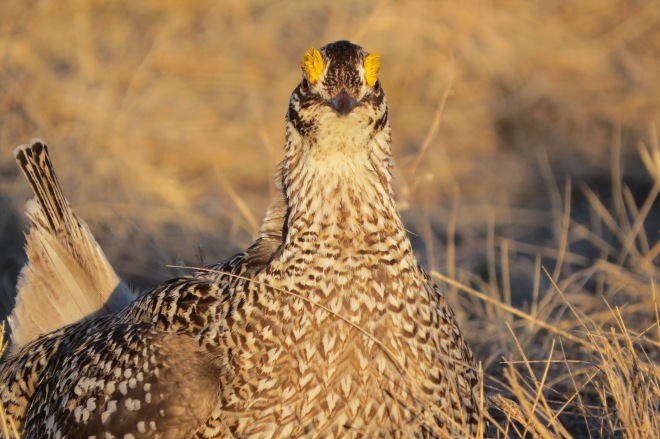 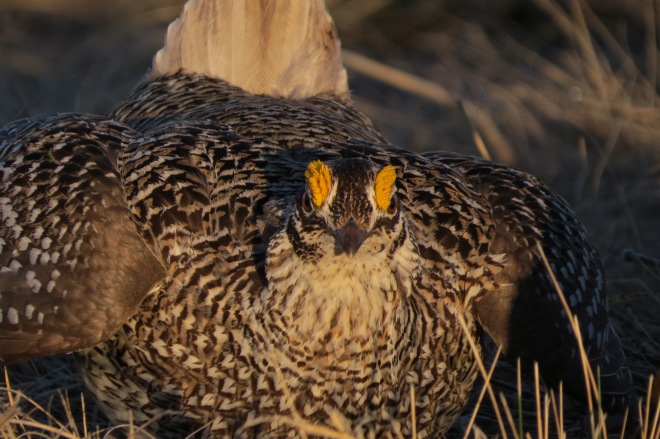 I would like to offer an enormous thank you to Jill, Phillip, Jaynne, Ray of Ray Brown’s Talkin’ Birds, Steve from the Wildbird General Store in Edmonton, Linda, Tracey, Theresa, Jackie, Gus, and Aileen for their generosity and support of my Great Canadian Birdathon this year!

I’m very excited to announced that through online and offline donations, I’ve exceeded my goal of $1,250. To date, I’ve raised $1,375! I’m so glad to have reached my goal, and I still have more than a month until my Birdathon.

This year, I’ve earmarked the funds I raise go the Beaverhill Bird Observatory near Tofield, Alberta, and Bird Studies Canada.

Again, thank you all so very much for your kind and generous support of the Birdathon, which goes to support bird conservation. 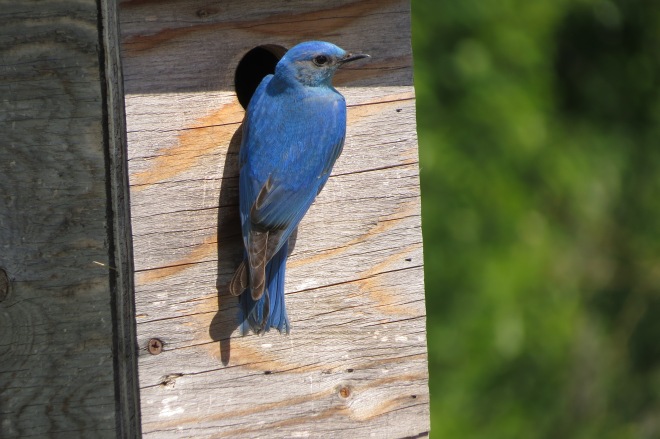 I saw my first American Robin of the season on March 30th — spring has arrived!

Birds in Your Backyard

The Cats and the Birds

Before I left Canada for Europe in early January, I emailed my German friend, Jochen, who writes at 10,000 Birds as well as his personal blog, to ask about birding in Lower Saxony during our visit to my grandmother’s cousin’s family. Jochen helped me with my list of target species and sent me maps of the area where we would be staying. I was also hoping that we might get to meet after several years of corresponding, but Jochen doesn’t live nearby.

Jochen also mentioned my name on some German birding listservs, and from there I got in touch with Imme and Ludger, birders from the Barnstorf area. I made plans to go out birding with them one day during our stay, in mid-January. We stayed at my grandmother’s cousin’s farm and had a wonderful time.

Their house is 100 years old and they have a dairy farm, where we were able to help with chores. Imme and Ludger collected my mother and me at 9am at the farm. The morning was quite frosty with some fog, but as the day progressed the sun came out and the day was perfect for a birding trip.

I didn’t have much time to do any birding on my own in Germany, so having Imme and Ludger to show me around was terrific.

The first species we saw were Little Grebes, Whooper Swans, and Tundra Bean Geese in a field near my family’s house. We didn’t stop for too long at any one place as Imme and Ludger were eager to find as many species as possible.

Imme and Ludger used a well-illustrated german field guide, and I had my iPad with the Collin Bird app. Between the two, it was easy to get both the German and English names for each species.

Many of the fields, such as this one at Lange Lohe, were filled with hundreds of Fieldfares and Mistlethrushes, 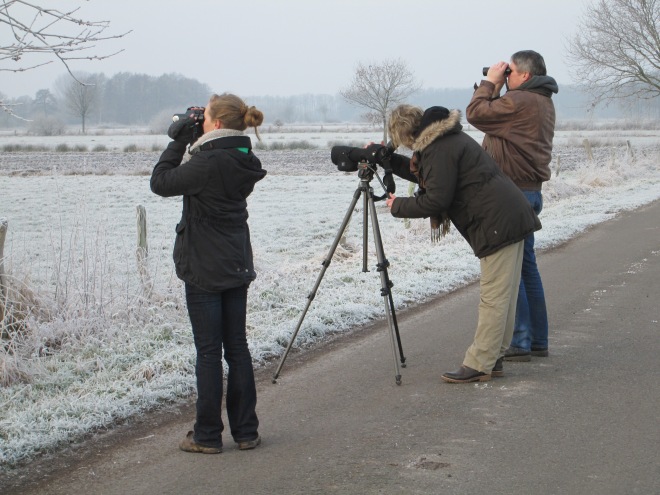 Here we are looking for a Common Snipe that didn’t want to be found.

Still looking for the snipe

When we arrived in Germany, everyone was talking about the cranes (or Kranich in German) which are now stopping in Northern Europe on their migration route, with some birds overwintering in Germany.

We were able to find several small flocks of cranes, often with Tundra Bean Geese. The cranes were very skittish, but we got some very nice views. In total, we saw 66 Common Cranes. 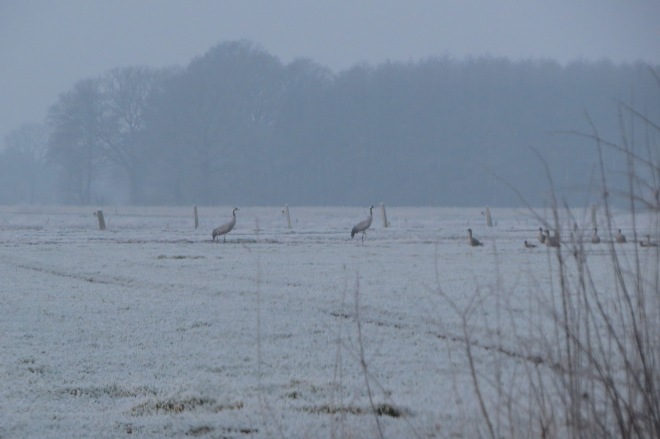 At the Drebbersches Moor near Lange Lohe we saw European Starlings, a small flock of Egyptian Geese which flew above us, more Fieldfares and Mistlethrushes, and a Yellowhammer singing at the top of a tree.

The last bird we saw near the moor was a Redwing sitting at the top of a tree. The Redwing and Yellowhammer were sitting in the trees in the middle of the photo, 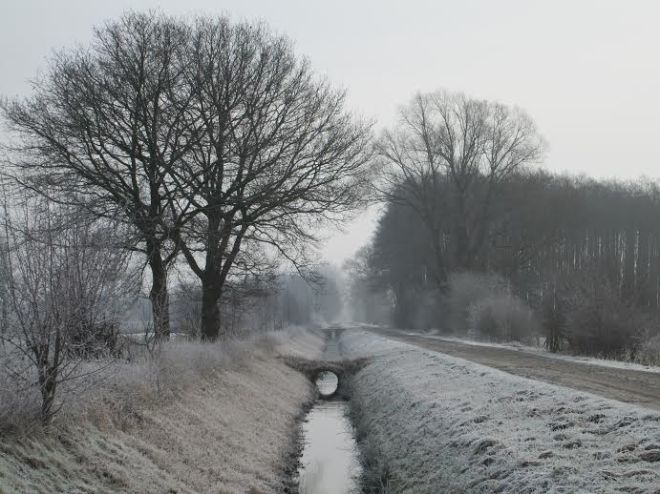 There was a Hen Harrier (or Northern Harrier in North America) hunting around the fields. We walked to the moor and my mother and I were both expecting to see vast marshland, but what we saw was so very different, 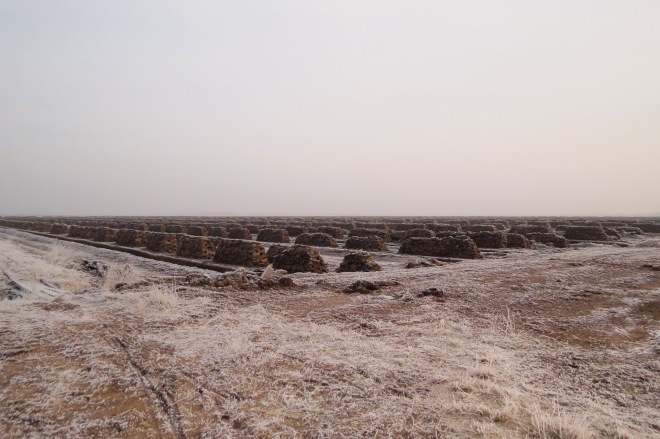 As far as the eye could see were stacks of drying peat cultivated from the moor. Imme and Ludger told us that Black Grouse is now extinct in the area because of habitat loss in the moors.

We saw many birds just driving around, including many flocks of swans and geese. In one of the flocks, we found three species of swans including Mute, Tundra, and Whooper Swans. While we looking at the swans through the scope, a bunch of Greenfinches flew past.

One of the best birding areas in the region is around Dümmer Lake which is particularly good for waterfowl. As we walked to the dock in Hüde, a Sparrowhawk flew right in front of us chasing a small songbird.

There were quite a few Chaffinches, Great Tits, and Blue Tits in the trees near the dock. Because of the cooler night time temperatures, the lake was frozen near the shore, and the only birds that were around were Graylag Geese sitting on the ice.

We left Hüde and drove to the west side of the lake. On the west side, we were hoping to find the White-tailed Eagles that had been seen in the area. We parked the vehicle and walked a little ways. On the walk we saw a Great Egret, a Gadwall, and had a better look at a Common Snipe.

A Great Egret near the Dümmer Lake

A Gadwall in a ditch near the Dümmer

Imme and Ludger set up their scopes and started looking for the eagles, which were sitting in some trees quite a distance away, but we could clearly see their white tails through the scope.

Graylag Geese along the Hunte river which runs through the Dümmer Lake.

A sign near the Dümmer letting you know you are entering a nature reserve, 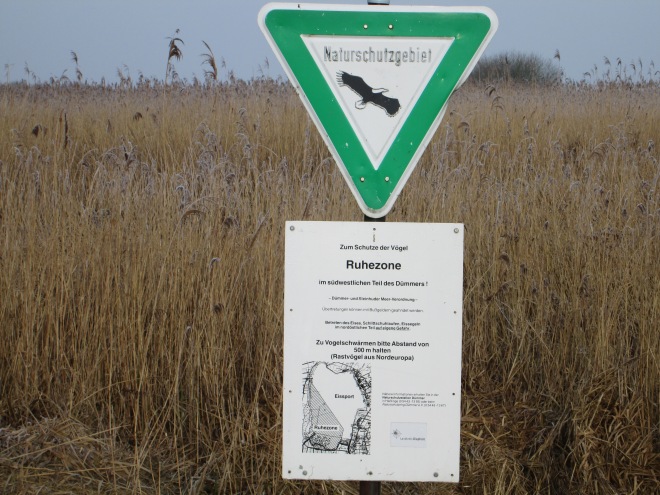 On the south-west side of Dümmer Lake, there’s another observation platform where we found open water. On the lake, we saw lots of Mallards, Common Mergansers, European Wigeons, Tufted Ducks, Black-headed Gulls, and a Great Black-backed Gull flying by.

As we were about to leave the platform, Ludger saw some pipits in the tall grass. In Germany, in winter, there are two species of pipits, but we weren’t able to get good views, so the pipits went unidentified. We did however see a female European Stonechat, which was a very nice find, 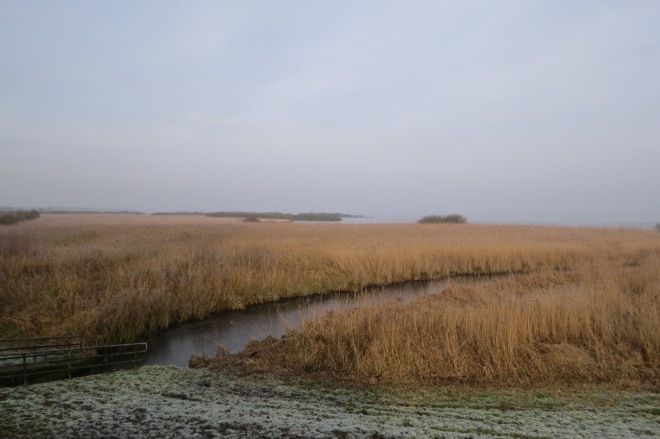 A view of Dümmer Lake from the observation platform

In Lembruch, we walked along the beach and found some Common Mergansers, Eurasian Coots, Mallards, Great Cormorants, a Mew Gull, and Caspian Gull, both lifers for me.

From Lembruch, we drove to the Osterfeiner Moor looking for shrikes that had been seen by other birders, but we didn’t find any. There were a few Northern Lapwings, European Goldfinches, and this Common Buzzard with a European Hare,

At the Osterfeine Sewage Treatment Plant we saw Eurasian Teals, Mallards, and Eurasian Coots. The teals swam away as we got closer, but the coots didn’t seem to mind our presence.

Near the end of our drive, we stopped at the meadows north of Dümmer Lake to look at a large flock of geese. The flock mostly consisted of Canada Geese, a few Tundra Bean Geese, Greater White-fronted Geese, and a handful of Barnacle Geese.

The last birds we saw were Stock Doves feeding in a field. We were unable to stop because we were on a highway, but I got a good look at the doves as we drove past.

Thank you so much to Jochen for all his help before my departure and to Imme and Ludger for sharing their birding knowledge and taking the better part of a day to show me the birds around such a beautiful part of their country. We had some very good conversations, and I learned a good deal about birds and birding in Germany; Imme said that there are few young people and women birding in Germany.

Here’s a list of all the species we saw (in order of appearance). The species in bold were lifers for me:

My Nikon Monarch 8×42 binoculars have served me well for the past six years, since my grandfather gave them to me when I first started birding. I’ve seen more than 300 species through them, and they’ve traveled with me to the Caribbean, New York City, Ontario, and recently to Europe — I’m still finding sand in crevices from my adventures at Long Point in 2012 and 2013.

However, one of the eye-cups broke recently and both of the objective lens covers broke off a long time ago, and I realized while in Europe looking at unfamiliar species that I could do with better optics. Last month, I started researching new binoculars, since I was ready for an upgrade.

I wanted a pair with similar specifications and that would last me a long time. After some research and because I already have a soft spot for Swarovski optics (my spotting scope is a Swarovski ATM 80), I made my decision. Because I live far from any stores to test binoculars, I had to go with previous experience, what I’ve seen other birders use, and what I’ve read about.

With the help of my mother (to use her credit card), we ordered a pair of Swarovski EL 8.5×42’s from the Pelee Wings Nature Store in Leamington, Ontario. Pelee Wings is an excellent store with wonderful service and very fast shipping. They have a vast selection of optics for birding and guarantee that they will meet or beat any lower price on binoculars or scopes in Canada.

My new binoculars arrived this past Wednesday and they’re wonderful! They came with a carrying case and strap, a microfiber cleaning cloth, and some Swarovski stickers. They’re a little heavier than my old binoculars, but that’s not much of a problem and a small price to pay for the improved optics. So far I’m very impressed and can’t wait to see what birds these new binoculars will help me find.