I went for a drive one evening at the end of April with the intent of photographing the nearby one-room school house in the beautiful evening light, but I saw some good birds as well.

There were lots of Snow Geese, Canada Geese, and Northern Pintails feeding in our field and in the neighbours’; Northern Shovelers, Buffleheads, American Avocets, Lesser Yellowlegs, Tree Swallows, Snow Buntings, and a Red-tailed Hawk were also around.

A pair of Buffleheads, 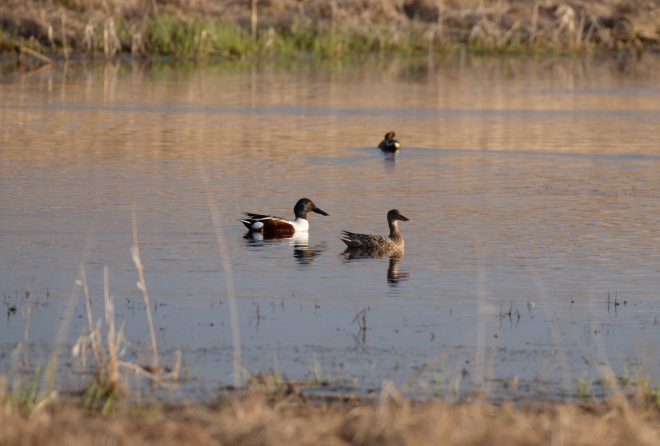 Driving down one of the back roads, there was a big raptor sitting on a fence post, and it was a Peregrine Falcon! I took a few photos before it flew off. This is the second Peregrine I’ve seen in the area. The last and first one I saw was in September last year.

The Peregrine Falcon — such a stately bird, 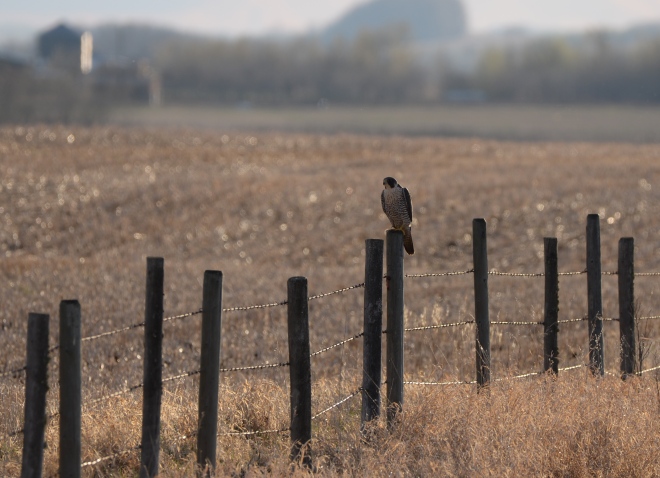 A view of the school from distance,

I switched my 200-500 mm lens to the 50mm lens to better photograph the school. A Great Horned Owl was sitting in the back window of the school, and because of the lens switch, I didn’t get very good photos. 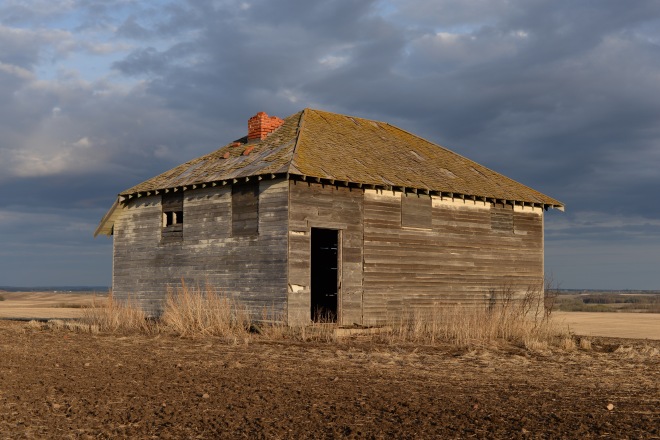 Two Rock Pigeons then flew out the windows, and that pretty much concluded the birding for the evening. 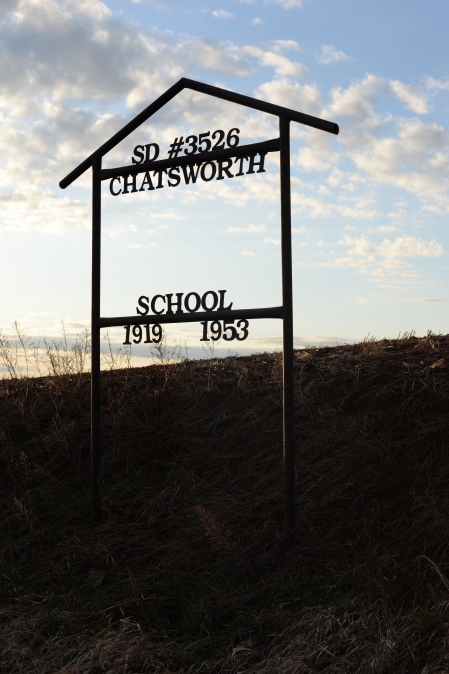 Yesterday afternoon, I was sitting outside, working on a blog post and enjoying the sounds of the geese and cranes on the slough (pond) across the road. At one point, I looked up from my laptop and saw a good-sized raptor hunting over the cattails in the slough.

It eventually flew right over our house and headed west. This is one of the best species I’ve seen around our house and I’m so glad I decided to work outside.

The first time I saw a Peregrine Falcon was back in 2013 in Ontario. This is my first sighting for Alberta, and I can even add it to my “Yard List”.

Here’s a photo of the huge flock of Sandhill Cranes that was circling above me as the falcon flew over,

Last year was my first time to attend the Tofield Snow Goose Chase, organized by the Edmonton Nature Club, and I had a wonderful time! Not too long after the Chase I had an email from Mr. Parsons, the ENC’s  Special Events Co-ordinator, who had invited me to the Chase in the first place, and who does so much of its organization. He had an idea for this year, to include a Young Naturalists’ Corner, and asked if I could help with the organization beforehand, and then working at the table. I thought it was a wonderful idea and started planning for the table last May. 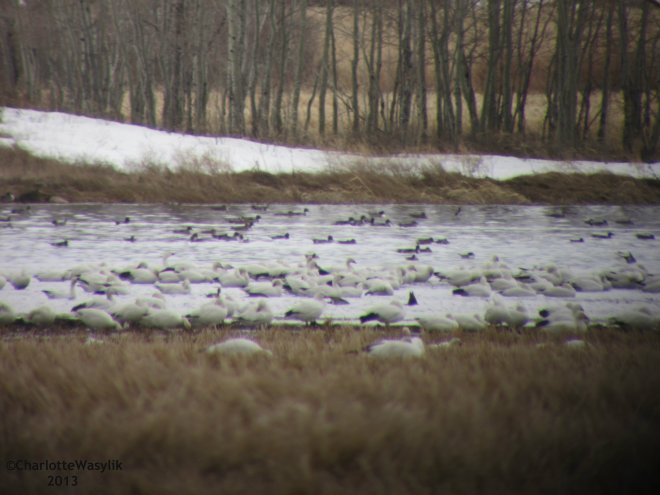 At this year’s Snow Goose Chase — this past Saturday, April 27th — there were some terrific displays at the Tofield Community Centre, including four live raptors from the Edmonton Valley Zoo; Alberta’s own John Acorn, the celebrated naturalist and entomologist whose enthusiasm on Saturday was infectious; a Bugs & Beetles wetland display; an incredible variety of touchable animal pelts from trapper Bill Abercrombie of Alberta Trapline Adventures; Royal Alberta Museum ornithology curator Jocelyn Hudon with the always fascinating mounted bird specimens (including a beautiful Scarlet Ibis); a table from the Beaverhill Bird Observatory; a display of various live and preserved reptiles and amphibians (including some of the preserved ones in water for the kids to touch), and a display of bird and animal carvings from the Boag Lake Carving Studio.

Considering it was our first year, the Young Naturalists’ Corner seemed to be very popular with all the kids and their families. In fact, there were nine buses of kids and their families, so it was almost overwhelming at times with so many people. Bob arranged for Andrea, a student, to help out, and our mothers were there as well, and also Petra Rowell, the executive director of Nature Alberta, with whom we shared the space.

We had some great door prizes to give away including two new children’s birding and nature books:  Look Up!: Bird-Watching in Your Own Backyard, written and illustrated by Annette LeBlanc Cate (Candlewick, March 2013) and The Kids’ Outdoor Adventure Book: 448 Great Things to Do in Nature Before You Grow Up by Stacy Tornio and Ken Keffer, and illustrated by Rachel Riordan. Annette donated three autographed copies of Look Up!, which was an amazing gift for the Corner, and Ken sent along some promotional bookmarks for The Kids Outdoor Adventure Book — thank you Annette and Ken. Both titles were among the stars of the Young Naturalists’ Corner, with kids reading through the books and hoping to win them, and parents and grandparents writing down the titles and authors. Petra and Nature Alberta donated a number of things too, including several toy/plush Ord’s Kangaroo Rats!

We all answered questions from kids and their parents, about how to start your own local nature club for the summer, where to find nature in the city, joining Nature Alberta’s “Young Naturalist Club” program, for kids ages 5-13. They loved guessing what animal had shed the antlers (White-tail Deer) and holding them up on top of their heads. Lots of the kids asked, “What are these books for?” or “Where can we get them?” So we told them that the books, which you can find at the library or a bookstore, are great for learning more about the animals they would see, and experiences they would have, at the Chase.

Bob did a wonderful job organizing everything and also taking time to help me with the Young Naturalists’ Corner. Thank you again, Bob, for everything — especially for asking to me to be part of such a wonderful day. It’s an honor to be asked to join everyone who works so hard to put on such an amazing experience.

I saw two first-of-season species while my parents and I were driving around Tofield: a large flock of Sandhill Cranes and five Canvasbacks. I also saw one male Mountain Bluebird as we were approaching Tofield in the morning, also 10 Red-tailed Hawks, Mallards, and Ring-billed Gulls.

Below are some pictures my mother and I took last Saturday:

The Young Naturalists’ Corner’s banner, especially made for this year’s Chase, 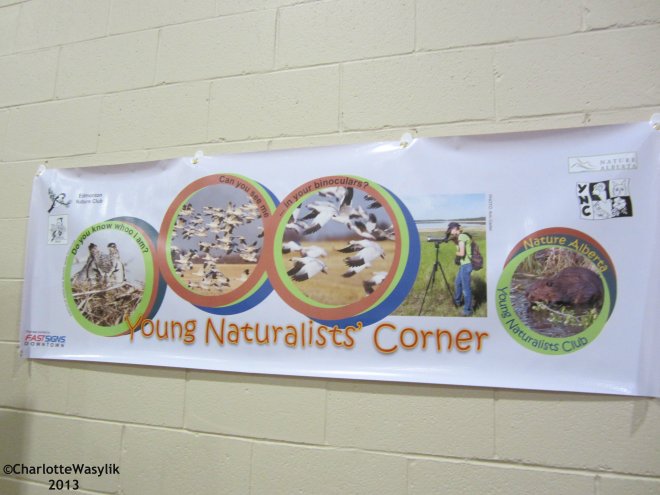 Here I am with John Acorn and Andrea who was helping me at the YNC, 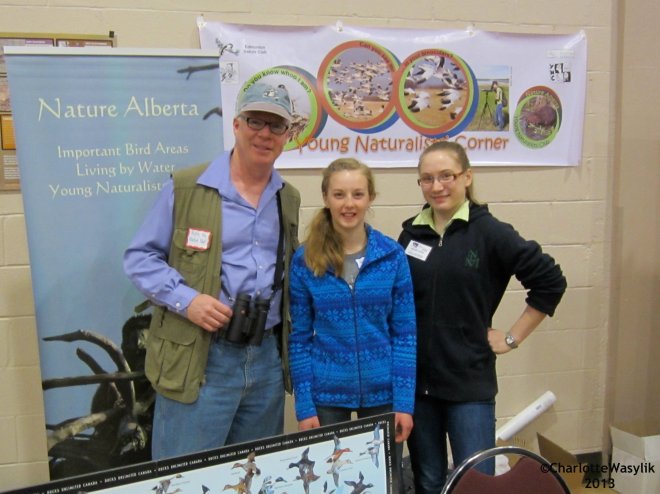 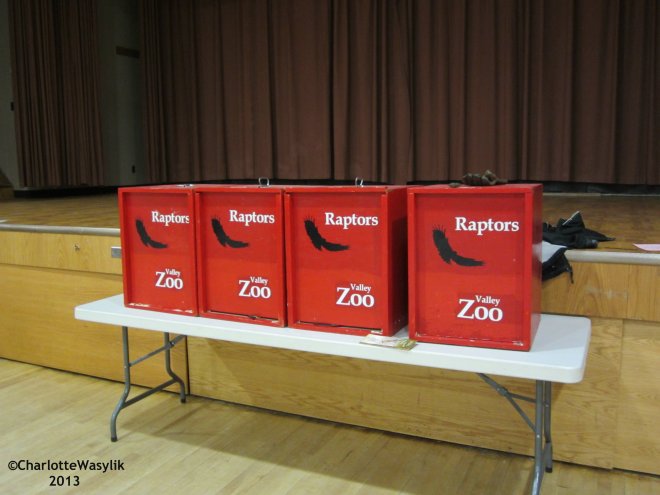 Mounted waterbirds from the ornithology collection at Royal Alberta Museum, 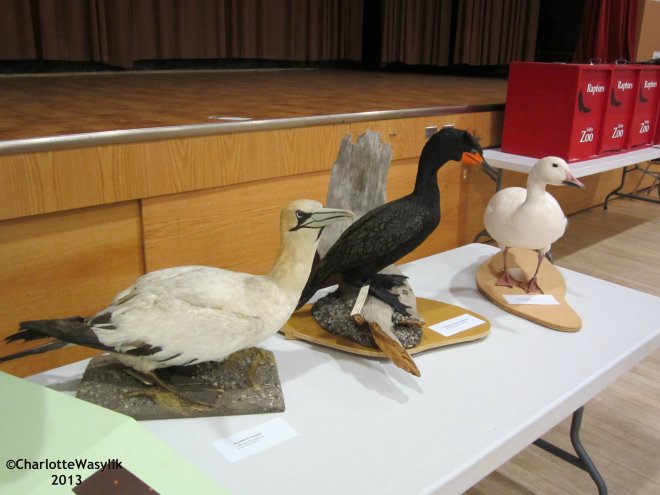 Here is part of our table with all the prizes and pamphlets from Bird Studies Canada and Nature Alberta, and some of the books I’ve written about in the past few weeks,

A deer skull and a pair of antlers (both from White-tail Deer) we brought from home for the table (sorry for the blurry photo, my mom didn’t have her reading glasses on at the time!),

Kids admiring the carvings at the Boag Lake Carving display, 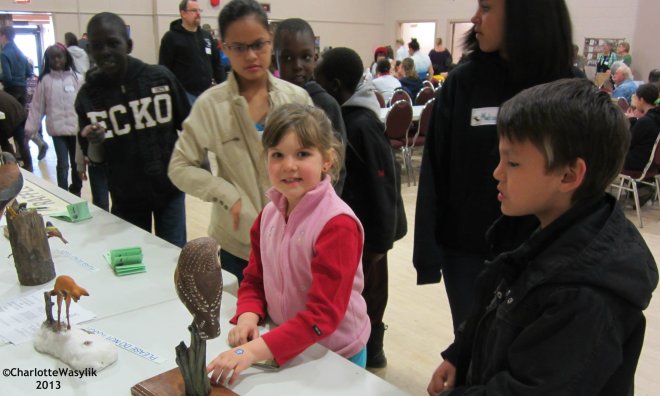 An Alberta crawfish (Orconectes virilis) in the pond life display, 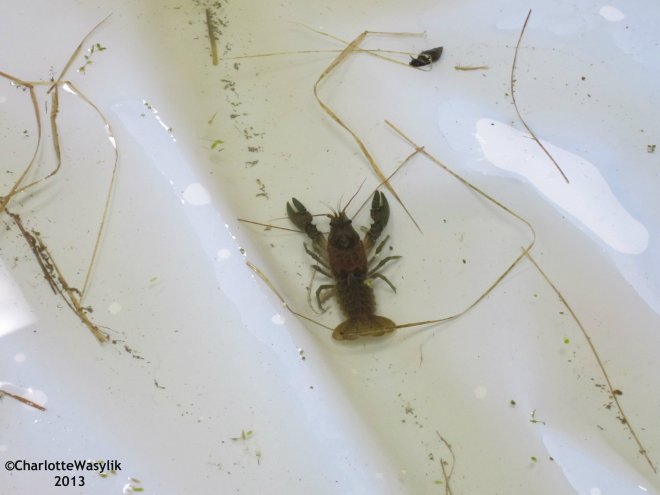 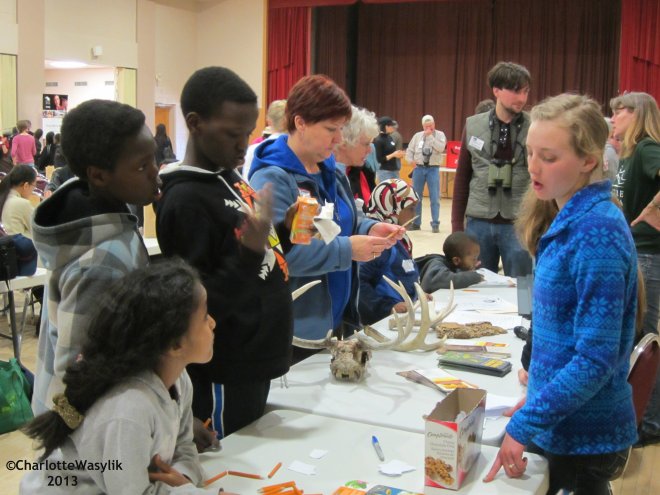 Even though we see thousands of Snow Geese in the slough across the road from our house, what would be a Snow Goose Chase without going to see some Snow Geese around Tofield?! Because of our late Spring the geese were a little harder to find, but we saw some very large flocks and I got some very good views, thanks to my scope!

Some digiscoped photos of the geese,

Next week there will be a new peregrine falcon camera ready to go in Edmonton, Alberta. You can read about it here at the Alberta Conservation Association (ACA) website. The nest and the camera are on the top of the city’s Bell (Telephone) Tower building, and the camera is sponsored by  Bell Mobility and Snap Security.

The bird is a female known only as E4.  She was born and raised on a natural sandstone cliff on the Red Deer River in the Summer of 2002. She has been nesting at the Bell Tower in downtown Edmonton since 2004.

You can read more about saving the peregrines in Alberta in this wonderful article, “The Last Peregrine” by Gordon Court, from Conservation Magazine.

Decorah Eagles: the pair of eagles have three chicks, who are getting ready for their first flight

Ellie and Albert, the pair of great-horned owls who made a nest at the Ellis Bird Farm (near Red Deer, Alberta, Canada)

Bobby and Violet, a pair of nesting red-tailed hawks in New York City. I have been watching this cam very diligently when I have the time.

Phoebe, an Allen hummingbird, with one chick who seems much to big for its nest!